The fake news finally got to me. The past two weeks seem to have been particularly awful with mainstream media and reporting and just “bad news” in general.

It finally got to be too much. I made a decision to try to cut back my intake of all the fake news (real news too) and made a goal for myself – No checking any social media sites once I am home from work.

It’s been almost a month and looking back, I was successful exactly 50% of the time. Not too bad, right? I kept my promise of not sharing or tweeting anything after I was home but I sometimes would fail at checking social media. On a few occasions, I didn’t even realize I failed until I found myself staring at my news feed; I had become THAT habitual about being on my phone after work.

But one day after work, I think I just had it with the news cycle in general and went to the adoration chapel to lament to God about all of this -He still loves me even when I whine and complain to Him 😉

And almost immediately I received a response:

That isn’t a piece of bread I’m staring at – that’s the real presence of my Lord and you know what? He’s real. And I can count on Him to give me nothing but truth and goodness and beauty. 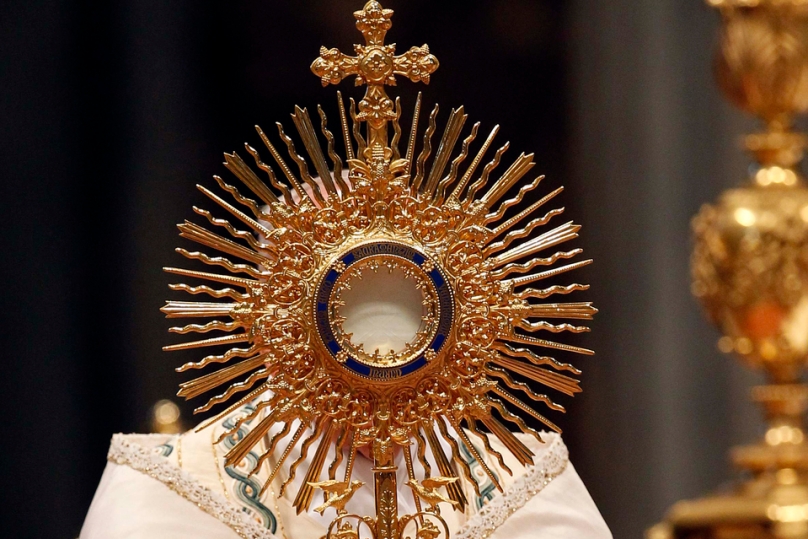 God is real.  And God doesn’t lie.  He can ONLY be authentic and real. He doesn’t know the meaning of the word “Fake.” That’s the Devil’s word. The Devil doesn’t have his own clay, so he twists and distorts what is sacred into something evil, something “fake,” something false, doing his best to pass it off as real.

And we fall for it a lot.

I know I certainly did.

So maybe it’s time to reclaim what is real and call out fake news, fake people, fake ideas and call them out when we see them.

And when the shouting and the screaming and the endless stream of bad news (fake AND real) gets to be too much, maybe retreating to one place where nothing but truth, goodness and beauty resides is the best medicine.