I don’t think it would be fair to do a tried and true Daily Mass Project blog post on dear St. Columbkille because I took zero notes on the day I attended. I have fond memories of this parish growing up. I seem to remember attending an evening mass or two here or maybe we went when our parents just wanted to go someplace different than our home parish? I just know I would stare at that back wall behind the hanging crucifix. I couldn’t find a picture of the interior but you can tell from the outside photo here… 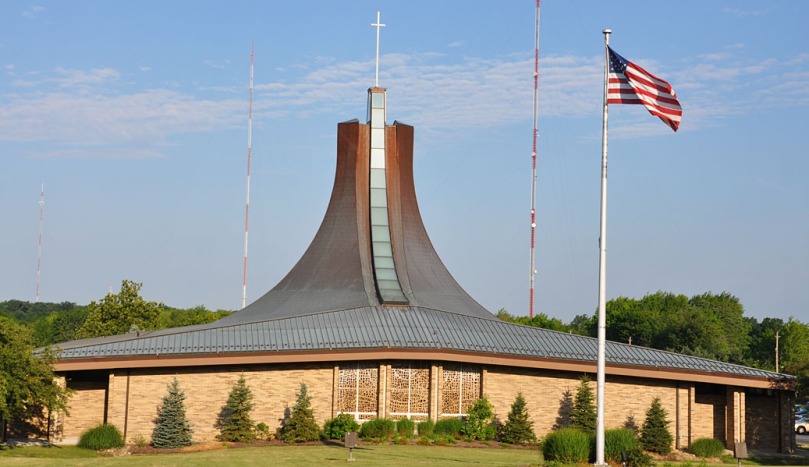 …that the roof slopes. I would just look up and be mesmerized by it. It was unlike anything I had seen.

I also remember thinking it was a little strange to see the Gospel writers names unevenly placed on the wall. And “Matt??” Really?

Other than that, the last time I went to mass here was when I graduated high school in 1996. And it has stayed pretty much the exact same. 🙂

One nagging question remains:  Just who the heck was St. Columbkille anyways? What kind of a name is that?

His name, Google tells me, was Columb. He was born in Ireland. And he was a gifted poet and musician. After he became a monk…

…he had founded no less than 27 Irish monasteries, including those at Derry, Durrow, and Kells, as well as some 40 churches. His work for the Church gained him the addition of “kille” to his name. Columb means “dove” in Gaelic and kille is “church”, so he came to be known as the “church’s dove.”

The more you know… 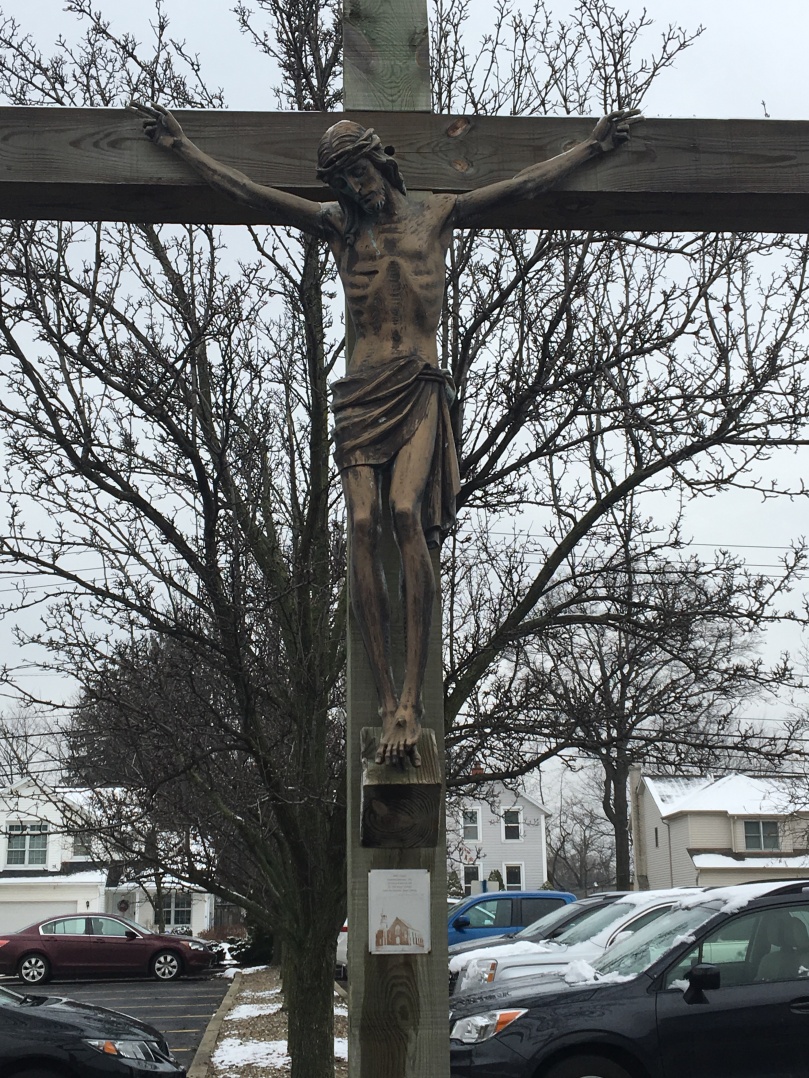 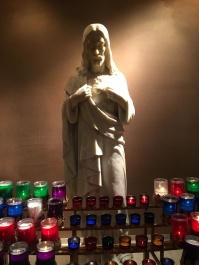 It’s probably not fair to attend churches during Advent because I really want to crown this one as my favorite in Cleveland that I went to this year. It’s just the perfect size: Not too small, not too big, just the right amount of decor, the stained glass is in these muted colors and not super “rainbow bright,” (just checking to see if my buddy Dennis is reading this). The stations of the cross were simple but really beautiful…

The only thing I noticed is that for a church that is named St. Michael, I didn’t see any actual statue of St. Michael. Unless I am missing it?? I did see this icon: 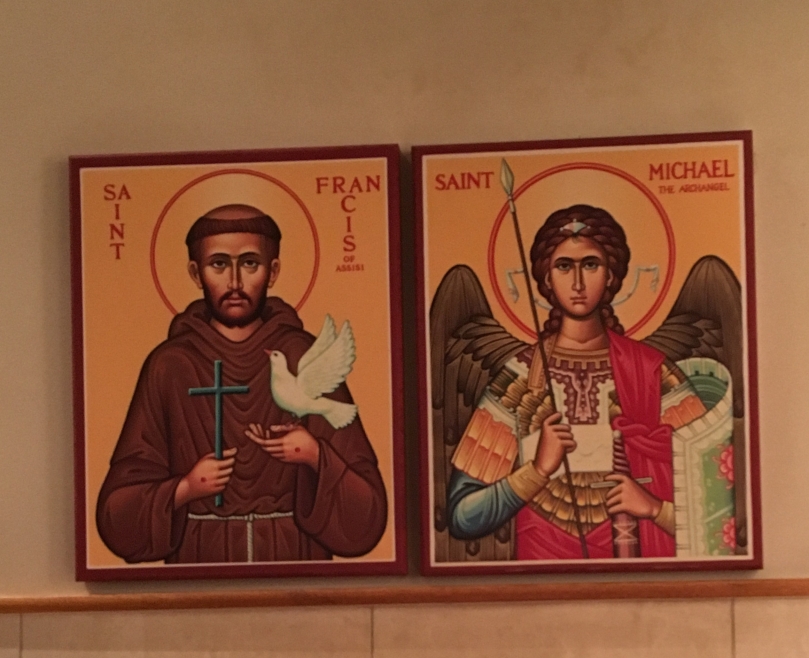 But I’m partial to statues. 🙂  He may have been in a Stained Glass window that I didn’t see. I was particularly in love with this one:

Initial Thoughts: Besides what I just said, I was greeted by this super friendly priest who as he walked up and down the aisle before mass; Overall it has a family and warm vibe from the get-go. I suppose it could have just been because of the occasion but I got the sense it’s always like this.

The bulletin was the hymnal and the missal! Innovative! And no worries about people scrambling to find the page numbers for songs. 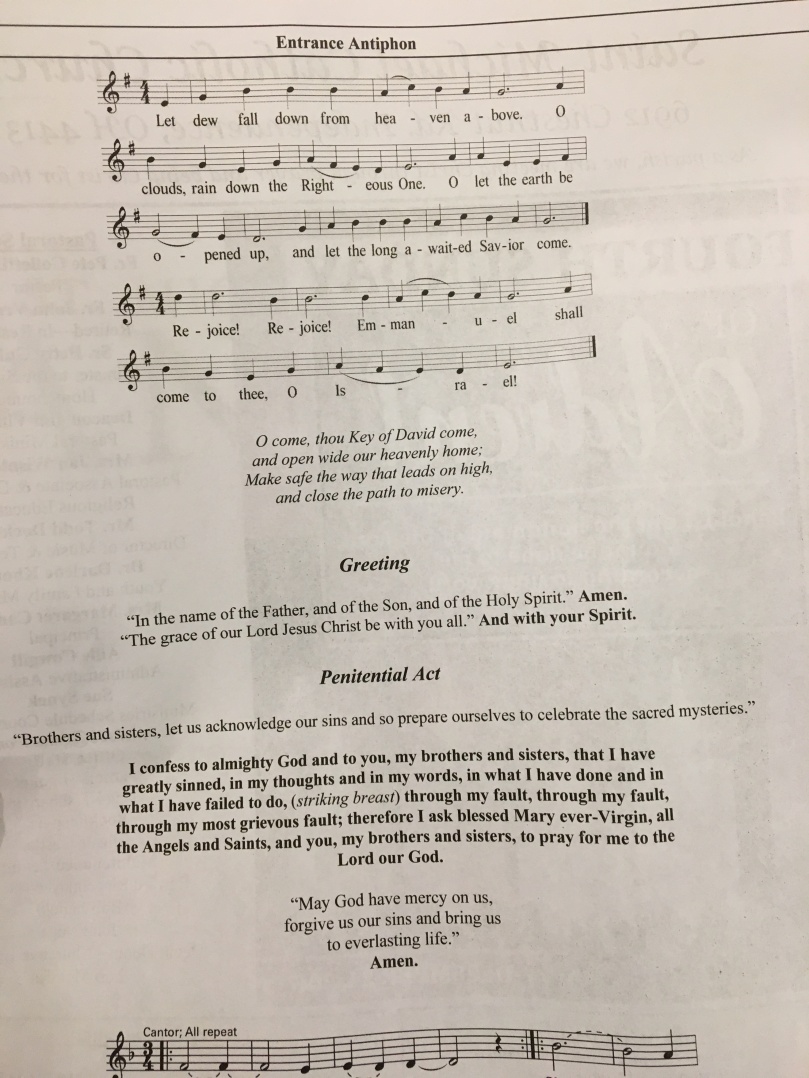 And the tabernacle…Assuming those angels are always there? Beautiful!

Homily Reflection: Despite having almost no voice to speak (not a good thing for a pastor to have the flu/get sick for Christmas!) Fr. gave a great summary of the first reading from 2 Samuel about King David and building a house for God. I gotta say, I probably would have zoned out but this is the number one reason people should read the readings a week ahead of time before going to mass: I had listened to Bishop Robert Barron’s podcast for this Sunday and heard his explanation of this 1st reading. It really helps because he puts it in plain language. If I hadn’t, I think I would have tuned out this first part of his homily because let’s be honest – We hear the first reading and if we have no clue what it means, we will lose interest within seconds (at least I do, especially if I haven’t read them ahead of time).

Long story short: David tells God “I’ll build you a house” and God is like, “You’re gonna make a house for ME? No. I’m going to make a house for YOU!” No one outdoes God on His gifts to us.

Fr. Peter then went on to talk about the Annunciation (the Gospel) and how he used to picture Mary “bowing” to the Angel Gabriel. But as he came to understand the Annunciation, he now believes Gabriel bowed to Our Lady.  He brought God’s proposal to her. “Can you imagine God proposing to a human being,” he asked.

“The angel is here today and through Mary’s intercession we have a few more hours until Christmas. God bows before you and me, mere sinners, and asks “What about you?” Will you let religion go beyond something mechanical and allow yourself to be taken by God? He offers Himself to us as His very food. He waits…and Mary prays.”

And he concluded his homily leading us in a Hail Mary. 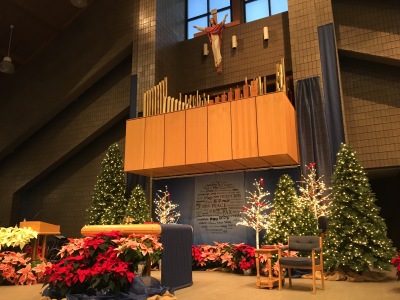 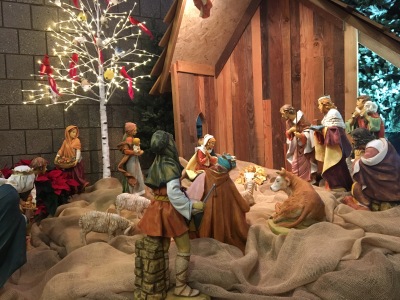 Initial Thoughts: A whole church to myself? Don’t mind if I do!

I arrived 45 minutes before mass started. Got some of these great pictures and proceeded to sit down and have some alone time with Jesus.

After awhile, a woman slid down the pew behind me and asked if I was new to the parish. “Nope, I just go to OLGC and live down the street and thought I’d give St. Kenneth a little visit today.”

She informed me that they say the rosary before mass and it looks like it’s just her and I so would I mind praying with her? Came to find out her name is Betty and she was SUCH a God-send. Of course, everyone has a story. I loved meeting her and talking to her after mass. Turns out she attends OLGC a couple times a week so she and I will see each other again.

We began the mass with the devotion to Our Lady of Perpetual Help; again, something I had never heard of until I moved here and started at OLGC. Parishioners at OLGC do this every Saturday morning after mass. Fr. Tom mentioned this in the homily…

Homily Reflection: Jesus isn’t just a baby; there will be suffering and trials and separations of families over the Lord.

The first reading is like a teaser/cliffhanger – Who is this Saul person and why should we care? Well, obviously, we’ll find out later that Saul is Paul after he has his conversion. We know that St. Stephen prayed for his persecutors, and that means Saul was being prayed for in that very moment.

How do we put Jesus’s journey of faith into our lives so that when obstacles come, can we still have the peace of Christ in our lives?

Referring to Our Lady of Perpetual Help, Fr. Tom remarked that this was a popular Tuesday night devotional for him growing up. He said it was the only thing that was in English, so they went to it all the time!

But the best explanation of why we would pray this devotional, he said: “You know how when you’re little and you want to do something, you ask Dad and He says no? So what do you? You go and ask Mom for help.”

Our Lady of Perpetual Help, pray for us!