I just got back from my trip to Turkey and Greece a few days ago.

I was gone for 12 days total but, as many people who travel for a living would probably agree, I felt like I was gone forever!

Although I’m thrilled to be home, I cannot wait for my next adventure. I’m already thinking Ireland or Prague…who knows! 🙂

In the meantime, I thought I would share some photos of the dishes we had while overseas. Granted, I didn’t take pictures of EVERYTHING I ate. But this is just a snapshot of the wonderful food we had the privilege of tasting while in these amazing countries. 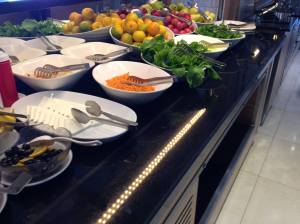 So how does one not go completely overboard? I have to admit I was a bit tired of all the RICHNESS of the food after the first 3 days. By the time we got on the cruise though, I was ready for more. 🙂

At the end of the trip I was just sampling bits of the desserts instead of eating one big serving of one of them. I opted for the lighter ones instead of the richer, thicker ones.

I drank wine once in a while but it didn’t agree with me while on the cruise. I also mixed types of drinks too often without thinking: Mai Tai, Beer, Wine…Yikes.

There was not one bad meal with the exception of a chicken kiev which was dry and I didn’t care for it. But other than that, all meals were delicious and tasty! I purposely tried foods that I would never normally have (except the greek yogurt but considering this was authentic GREEK yogurt, I considered that a necessary exception to the rule).

I also tried to adhere to some guidelines I made for myself but anyone can apply these to a situation when you’re options are just buffets and buffets of food:

1. Skip the bread as much as possible – I wasn’t as good with this at restaurants but I was very good with it at the buffets because there was just SO much of it available.

2. Pile on the protein as much as possible – Although I had scrambled eggs almost every morning with my breakfast and they were most likely doused in butter, I at least felt better about having it as opposed to the sausages or bacon. I also snagged yogurt as much as possible when it was available. For dinner I had my share of lamb and beef but the 3 nights on the cruise I had turkey (ironically I didn’t have turkey in Turkey, only in Greece) and fish. I was done with beef at that point.

3. Veggies and fruits aren’t just for decoration – I probably had more fruit than veggies I admit. But I had the most delicious dates and figs…YUM!!!! I had some steamed veggies with dinners but not as much with my lunches as I should have.

4. Hungry? Grab a Snickers – Yes I had a Snickers bar at a rest stop somewhere in Greece when there was nothing else available. My only other options were mini cookies and mini chocolate squares and pretzel sticks and mini pretzel sticks, etc. Carbs carbs and more carbs. Well, the least I could do was have some darn protein! I was actually craving a protein bar so instead of starving or just loading up on sticks, I opted for the Snickers and some almonds. Better than nothing!

5. Hydration is key – I already confessed to having my share of adult beverages but it wasn’t nearly as much as I could have had. Since you couldn’t drink the water there, you had no choice but to get bottled water as much as possible.

All in all, I gained about 3 or 4 pounds. I’m hoping it’ll be shed in a week as I get back to a normal eating plan.  I feel like I’m “detoxing” the breads and all that cheese out of my system currently. It felt good to get back in the gym the next day after I got home. I was sore the next day which tells you I wasn’t nearly lifting as heavy as I normally do. (most of the gyms didn’t have barbells, just free weights).

I think the lesson is that when you’re on vacation, you can still stay relatively true to your plan. My plan has been what I call “Freestyle” for months now. No real tracking or logging going on. I didn’t go completely overboard, in my eyes. I enjoyed myself and enjoyed the food that Turkey and Greece had to offer.

If you’re planning a trip or a vacation, keep some of those food tips in mind. Remember, don’t obsess over it – Live your life!