This weekend was the infamous Dessert Party thrown by my former client Lina and her hubby Jeff.  Lina spent the better part of her December and probably November baking all kinds of delicious treats for this annual festive event.  I attended 2 years ago and although I remember indulging in a few treats I honestly can’t remember what I had.  I’m guessing I just didn’t care because I wasn’t really watching my weight too closely back then.

This year is obviously a different story.  Declining the invitation was not an option because once again, I want to prove that losing weight is possible during the holidays.  Plus, I don’t see the need to be anti-social when you’re watching what you eat.

Here is what was presented to myself and their guests upon walking in the door:

I don’t think this picture does it justice…so here are just a few close ups: 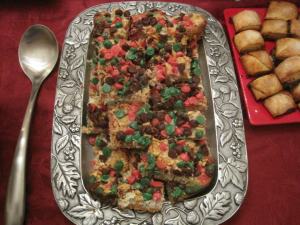 So what do you do when you’re trying to lose weight but you’re invited to a dessert party?  You have plan.  My plan was to eat enough to be satisfied but not too much that I felt guilt and gluttony.

I brought a friend with me, Brian, who I assigned the task of “Spotter” to.  I told him to spot me and make sure I didn’t go overboard.  Unfortunately Brian doesn’t know me well enough to know what is considered overboard in my mind. BUT, he did a great job regardless. 🙂

Lina and Jeff also did a great job supporting me by showing me things that I could have without the added guilt.  So awesome of them to think of little old me!

I was going to take a picture of what I ate but I didn’t want the guests there to think I’m an Instagram freak or strange even though it’s becoming quite normal to take pics of your food.  So I’ll just tell you the damage:

I stopped for a while and chatted up some people….Taking a break from the madness.

After about a half hour of drinking water and talking I thought I could handle just a little bit more.  Brian mentioned the pumpkin pie would be worth it as well as this 7 layer chocolate chip  graham cracker ecstasy Lina made (Picture above on the silver plate).  So I opted for one little bite of pie and one small piece of the layered goodness.

HAD I NOT been trying to lose weight I honestly think I would have gone bonkers and would have had no self control.  The end result would have been ugly.

At the end of the night I still fit in my size 7 pants.  I haven’t worn size 7 pants since I moved back to Cleveland from Chicago.  And I got them around Christmas time so it’s been 3 years.  And they JUST fit.   So a bit of advice if you’re attending a holiday party of the same magnitude and find yourself with the same doubts:

Wear a pair of pants that JUST fit…that if you went nuts with food you MIGHT embarrass yourself and pop/rip them.

Okay maybe that’s not the best advice but it worked.

Thanks again to Lina and Jeff for putting on a great party!  And thanks for reading my blog!

Interesting Sidenote:  On the way out the door I met a woman whose daughter does Figure Competitions right here in Northeast Ohio!  How random is that??  Feels so good to meet other women who are doing the same things since honestly, I don’t know anyone locally doing/training for a competition.

Weight this morning: 127lbs.  The meal plan Coach Davies has me on is clearly working very well.  I still feel energized, still in a great mood, still making progress!

I did a much better job planning my meals for the week and even had time to help out my family making pierogies yesterday!  YUM! (Potato of course…sorry can’t do the sauerkraut).

7 thoughts on “Step Away from the Dessert Table”