I had the awesome privilege to hang with some 400 Catholic women a couple of weeks ago in Cleveland for their First Annual Cleveland Catholic Women’s Conference called Fearlessly Faithful.

I knew several women who were part of the team that brought this conference together and being from the CLE, I was excited to support it, even before I knew who was going to be there, where it would be held, and who would be speaking.

It was well worth the 2 hour and 45 minute drive for some sisterhood time, a time of rest and to be fed spiritually, and to hear from some amazing speakers. 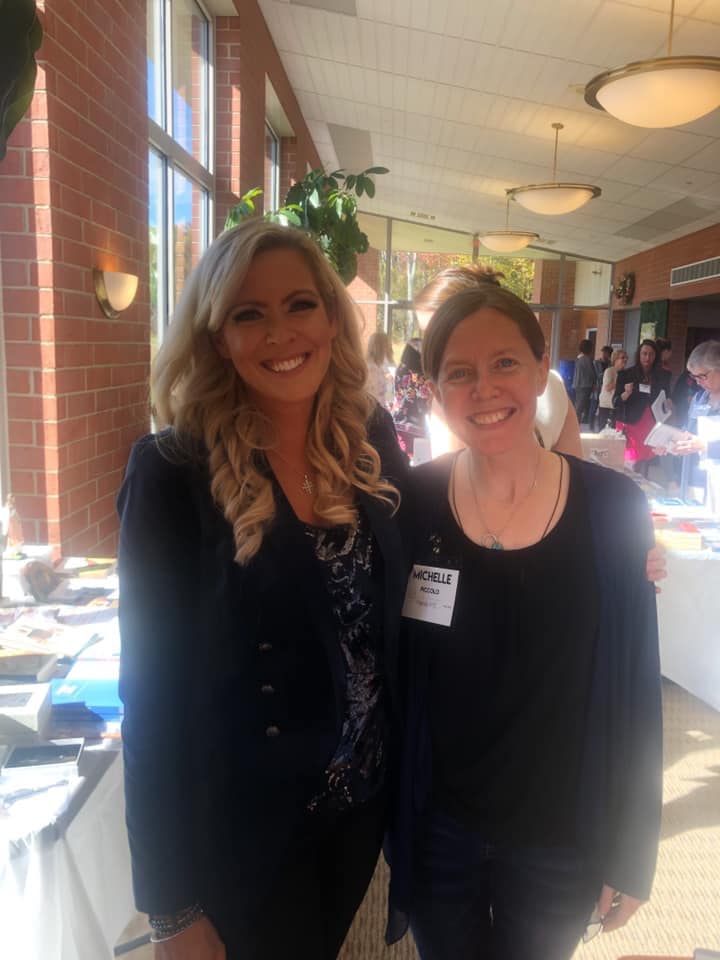 The day was emceed by Brooke Taylor, who has an awesome podcast called Good Things Radio. She’s a speaker, writer, radio personality and super Mom. I love listening to her show as she interviews guests from all different states of life – religious, ordained, single, married, husbands and wives, authors, etc. She’s been hosting pilgrimages to the Holy Land for a couple of years and hosts a women’s retreat called Arise, which I am very stoked to attend for the first time next year in June. (Ladies, if you’re interested, I think there are still some spots left —> Click here to read more about it and purchase a ticket).

The first speaker of the day was Mary Bielski whom I did NOT manage to get a photo opp with nor did I get a chance to speak with her to meet her, but, alas, it’s a #FirstWorldCatholicProblem.  I had heard her name from some of my Theology of the Body friends years ago as a popular national speaker and youth minister. So I was really excited to hear what she had to say.  Her talk was called Fearlessly His and it was all about our identity. It wasn’t your typical, “Hey ladies, you’re a beloved daughter of God, dontchaknow?” She went deep, she got personal, she got raw and it was really good to dive deep into these waters.

She also talked about the Model of Identity, which is SO needed today in our culture which is clearly having an identity crisis. This 3 step model looks like this:

Mary pointed out that today, in our culture, the model is reversed:

It’s very much an American thing to identity someone by what they do for a living instead of who they ARE; a beloved child of God.

The Good news is that we have been rescued, we’ve been adopted and we have the power that comes from the Father to rebuke the lies that the world feeds us.

She also said something that was very similar to something I had recently read in my Women’s bible study and that was this:

I think I want to put that on a t-shirt.

The second speaker was Fr. Pat Schultz and there’s no need to even try to summarize his awesome talk entitled Fearlessly Forgiven and Restored because he recorded it (YAY for technology!) and you can listen to it here:

Fr. Pat’s talk was similar to Mary’s in that he really wanted us to know that God is saying to us: “You are a beauty to be revealed.” We were encouraged to expose and silence the voice of the accuser, to unleash love no matter our state in life, to nurture life and live out our feminine genius whenever possible. Beautiful and inspiring! I would encourage you to explore Fr. Pat’s Vimeo channel to hear his homilies and other talks as well. They are stellar.

The final talk was from Laura Mary Phelps. I did miss the first part of her talk, entitled Fearlessly Sent, but I did manage to catch the bulk of it. She had encouraged us to check out one of my FAVORITE books called “Into Your Hands Father”  by Wilfred Stinnison. It’s all about doing the will of the Father and how to know IF you are doing that, because, let’s face it, it’s difficult to discern if we’re really doing what God the Father wills for us or following our own selfish desires. I have half of that book highlighted – it’s THAT good.

I also loved her point about suffering and how it’s not written in the Bible anywhere, “This too shall pass.” That’s something we say to one another in difficult and challenging times of trial and suffering, but it’s not really…true.

An actual scripture to cling to is 2 Corinthians 4:17 which says:

“For this slight momentary affliction is preparing for us an eternal weight of glory beyond all comparison,” which Laura “translated” into: “The suffering you’re in now is necessary to get you to the place of awesomeness that’s coming.”

In between speakers was what I considered probably the BEST part of any Catholic Conference and that’s Adoration and Confession as well as Praise and Worship.  I think 17 priests from around the diocese made themselves available to over 400 women who wanted confession, while we were divided into groups to sit in front of Jesus while the lovely and talented Taylor Tripodi blessed us with her beautiful voice and musical gifts.

To wrap up, I wanted to share this I Declare card that I received at a Holy Hour for women at my parish over a year ago and I’ve kept it in my Bible ever since and refer to it daily. It’s from the women’s Bible study Walking With Purpose and the image is from the chapel in Magdala of the hemorrhaging woman called “Encounter.”

Those declaration statements are so powerful when we not only pray with them, but we need to actually believe them and take hold of them in order to live these truths out in our daily lives. Because speaking from experience, we have a lot of women (and men) believing the lies. The lies of “You’re not good enough, you’re afraid, you’re weak, you’re not pretty enough, you’ll never belong…” etc.

These declarative statements are the antidote to those lies. I would encourage any woman struggling with her identity to pray with these often.

When we trust in God’s providence, when we believe that God is a good Father, and when we are receptive to what the Holy Spirit is telling us about the truth of our identity in Christ, that’s when we can live truly Fearlessly Faithful.

I recently gave a talk on the topic of the Church and Feminism in the Diocese of Lansing for their Theology on Tap Young Adult group. We adjusted the title to “Can You Be Pro-Woman and Catholic? Yes.”

Recall that Theology on Tap talks take place at bars, so the environment is not one where you really want to “teach” as much as just “share” some knowledge. In other words, you can only go so deep with folks. Even though I’m pretty comfortable talking to groups at bars, I much prefer a classroom setting to get into the nitty gritty. But overall, the feedback was very good and everyone really enjoyed the Q&A afterwards (not recorded).

However, if you really enjoy watching me from the side, (what a screenshot, right?) and you like my ramblings, go ahead and watch some of it below here: